*for a copy of our disclaimer click here. This is our opinion and should not serve as advice

Its pipeline consists of  4 unique immune-modulating monoclonal antibodies that are in clinical testing across 5 high-value immune-mediated diseases. On top of this KNSA is well-funded through 2023 with $323M in cash,  and is on the cusp of its first potential commercial launch with multiple data catalysts in the first half of 2021 (1H21).

KNSA is led by Sanj K. Patel who serves as CEO and Chairman of the Board of Directors (BOD). Sanj is an industry veteran who took KNSA public in May 2018 three years after selling his last company Synageva BioPharma (Nasdaq:GEVA) to Alexion Pharmaceuticals (Nasdaq:ALXN) for $9.5B (including cash). Furthermore, Felix Baker of Baker Brothers Advisors, lauded as one of the most successful healthcare-focused investment firms of all time, sits as the lead director of KNSA’s BOD. 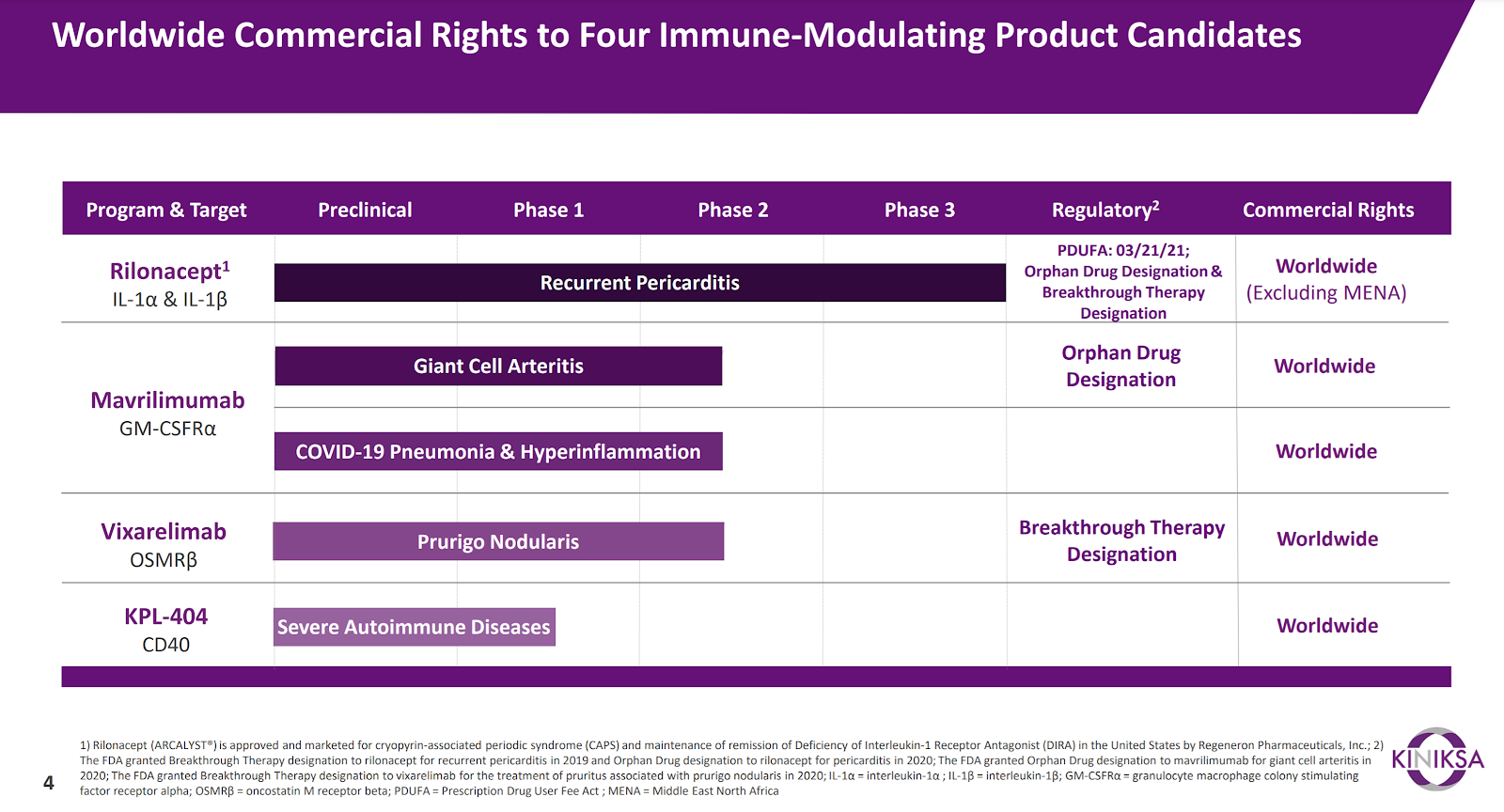 Rilonacept is a monoclonal antibody inhibitor of interleukin-1α (IL-1α) and interleukin-1β (IL-1β) with Orphan Drug Designation and Breakthrough Therapy Designation for the treatment of Recurrent pericarditis (RP), a painful and debilitating autoinflammatory cardiovascular disease.

KNSA licensed Rilonacept from Regeneron Pharmaceuticals (Nasdaq: REGN) in 2017 to investigate it in diseases believed to be mediated by both IL-1α and IL-1β (such as RP). Rilonacept has been marketed under the brand name Arcalyst for the treatment of Cryopyrin-Associated Periodic Syndromes (CAPS) since 2008 and is delivered as a monthly subcutaneous injection. Last year the FDA accepted KNSA’s supplemental biologics license application (sBLA) for Rilonacept with Priority review and assigned a PDUFA date of 3/21/21.

Upon the anticipated FDA approval in March KNSA will take over U.S sales and distribution for Rilonacept for all indications (RP, CAPS, etc.) and split the profit with REGN. To get an idea of the near-term earning potential for Rilonacept we’ll look at net product sales of Arcalyst by REGN and KNSA’s pricing strategy for RP.

In 2020 Arcalyst generated $13.1M in net product sales down from $14.5M in 2019 and $16.5M in 2017. With regards to pricing of Rilonacept for RP KNSA’s management team has disclosed it will be in line with other MABs that have Orphan Drug and Breakthrough Therapy designations. According to comments made by management that will put the price tag around $20K per patient per month.

Of the current 40K U.S patients afflicted by RP about 14-17K are considered part of the company’s addressable market. These are the patients that chronically relapse despite treatment with NSAIDs (nonsteroidal anti-inflammatory drugs) and Steroids and those who become dependent on Steroids to manage their disease. Initially KNSA’s lean specialty cardiovascular sales force will focus on the 3000 estimated patients that experience their first disease recurrence. Over the first year KNSA’s specialized sales team is expected to reach about 70% of RP patients in the U.S. Considering the average treatment duration in trials was 6-9 months, KNSA can generate ~$360M and $540M, respectively, off the initial 3000 patients alone before deducting REGN’s cut.

More on RP and the need for a targeted therapy

RP is a debilitating rare autoimmune disease characterized by acute and recurrent attacks (inflammation) in the membrane-sac surrounding the heart. Currently there is no FDA approved medication specifically indicated to treat RP. 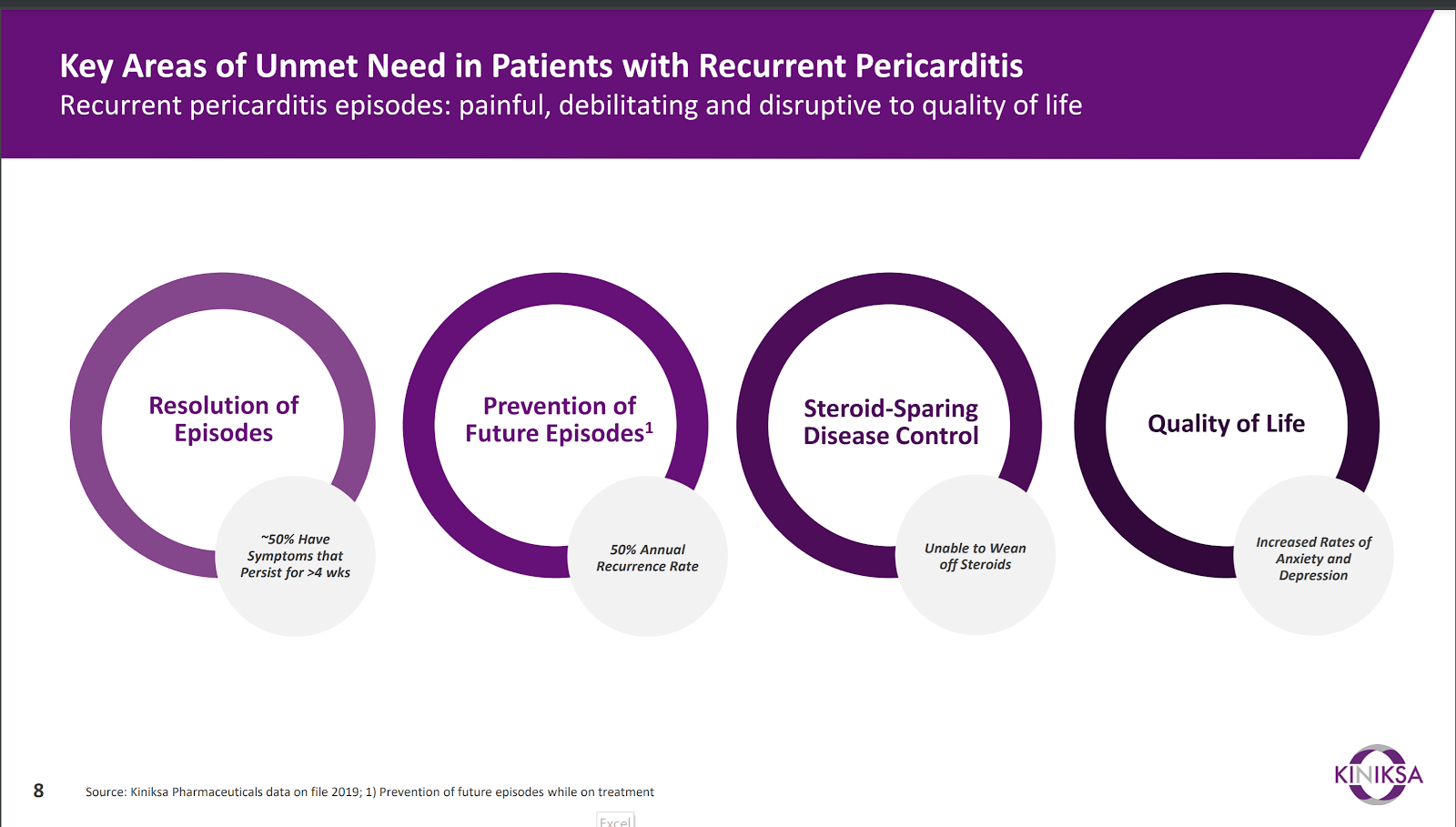 When patients first are diagnosed with RP they are treated with colchicine and NSAIDs (nonsteroidal anti-inflammatory drugs) which are relatively tolerable. Once they relapse and the disease becomes resistant patients begin a regimen of steroids. This, however, is a costly treatment course in terms of quality of life for the patients, disease control, and economic burden on the healthcare system. Patients that require long-term steroid therapy commonly experience nasty side-effects like ulcers, osteoporosis, and ulcers. If approved, Rilonacept stands to address these shortcomings (Figure 2) and potentially become the new standard of care for RP. 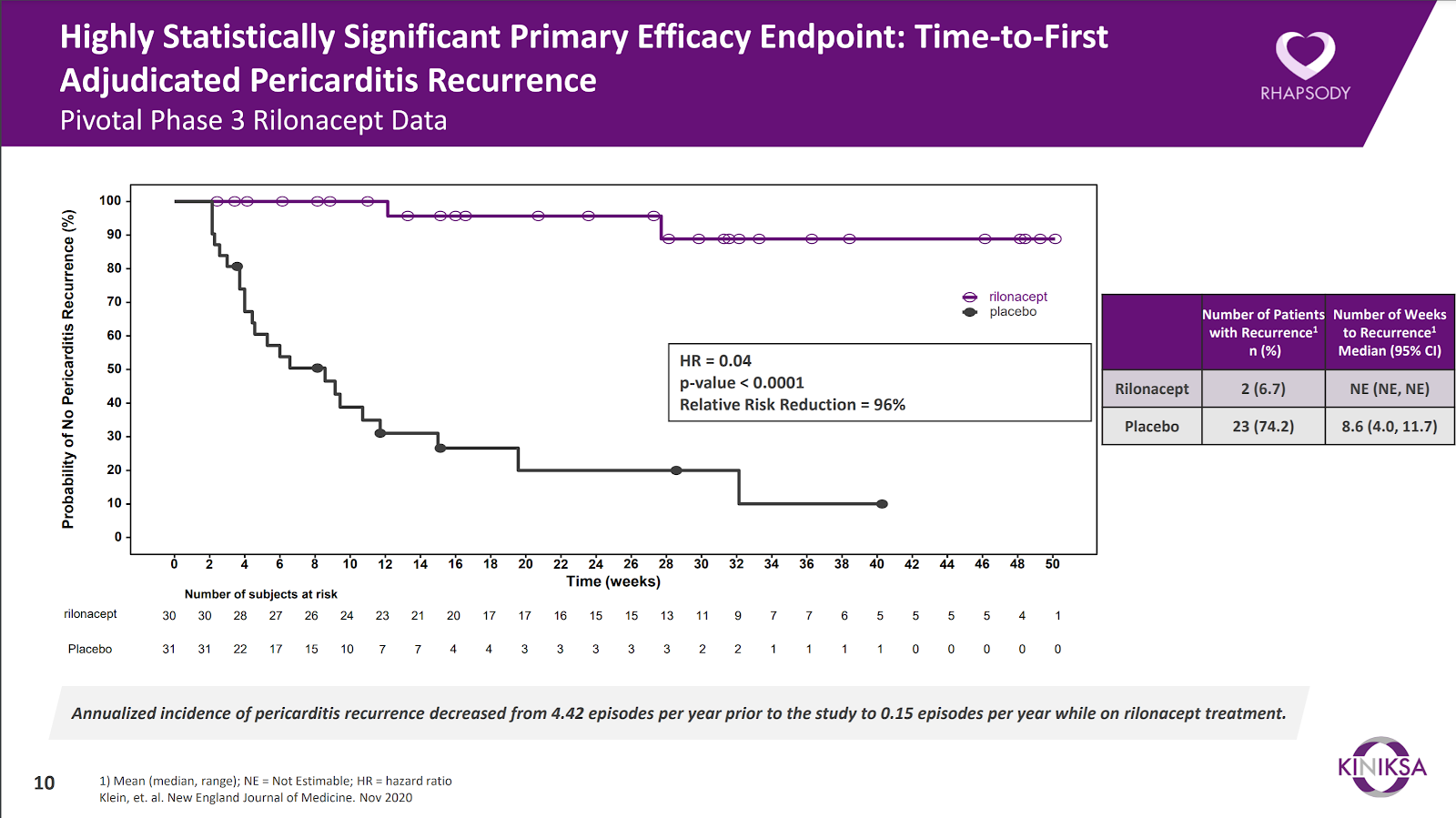 Top-line data for KNSA’s pivotal Phase 3 RHAPSODY study reported in June 2020 showed highly statistically significant (p<0001) efficacy at preventing recurrence of RP compared to placebo (Figure 3) hitting all major endpoints. In Figure 3 we see that over 16-weeks only 2 out of 30 patients (6.7%) in the Rilonacept arm relapsed after treatment versus 23 out of 31 patients (74.2%) in the placebo arm. This staggering delta is further validated by the fact that not enough patients treated with Rilonacept relapsed for the investigators to calculate the mean number of weeks to recurrence.  Additionally, Rilonacept had a very attractive safety profile with a hazard ratio of 0.4 meaning that the odds of a serious event or death were double in the placebo group. 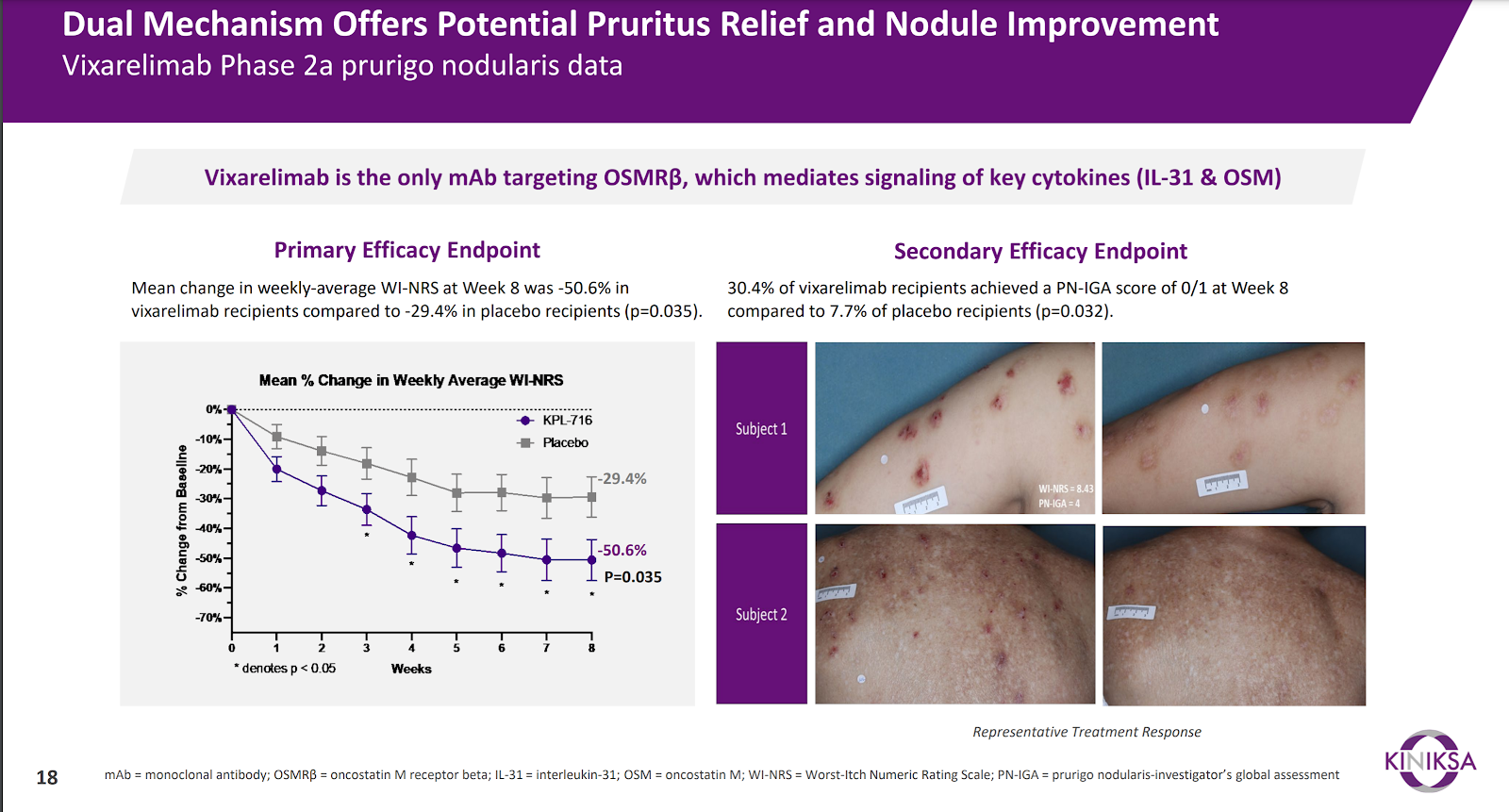 Figure 4: Resolution of recurrent PN over 2-months of treatment with Vixarelimab

While the data appears to strongly support our bullish thesis and approval, a CRL from the FDA would likely result in a significant pullback. Outside of this risk the main elements of risk present are general market factors and larger scale sell off on the indexes. While we believe the likelihood of these risks materializing is slim, it is important to understand them and realize their potential for unfolding.

Kiniksa Pharmaceuticals presents a compelling opportunity. With a diverse and promising pipeline focused on areas with few to no treatments, Kiniksa is uniquely positioned to leverage first mover advantage across multiple indications pending approvals. Kiniksa has proven management with a history of buy outs and execution on milestones for both patients and shareholders. With sufficient cash and a PDUFA on the horizon, shares of KNSA appear to be trading at a discount. We plan to accumulate shares in the $18-20 range pending market conditions and have a price target of $30-40 before the 3/21/21 anticipated PDUFA date.